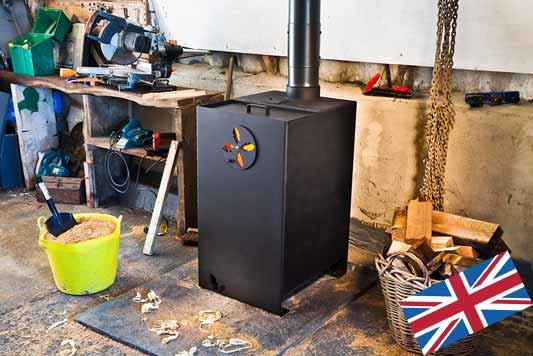 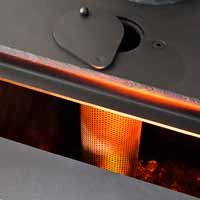 There is a stainless steel outer tube made of mesh which means that, when burning sawdust, it can be lit by dropping a fire lighter down the tube so that the fuel can burn from the bottom up. Other workshop stoves can only burn from the top down, which is less efficient. When burning from the top down only the top of the stove will be hot, when burning from the bottom up the whole stove gets hot. Oakfires are the only workshop stoves that have double tube technology. This also allows the Oakfire stove to be lit simply by fililng with sawdust, then dropping a lit tissue or firelighter down the tube! 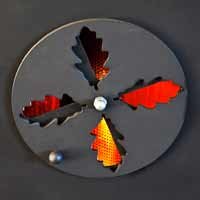 Oakfire workshop stoves are very controllable. There are both primary and secondary air vents giving a good degree of control over the fire. The secondary air control vent holes have the Oakfire Oak leaf motif. You can see the primary air control in the picture below. The steel ball is the handle which allows you to turn the air vent. 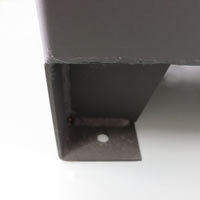 Oakfire stoves are very stable with the front and back of the stove coming down to meet the ground and then bending at 90 degrees to form two full width legs. These legs have predrilled holes allowing you to easily fix them down to the floor for a belt and braces job. 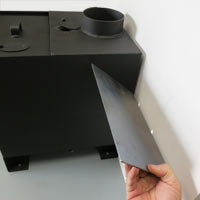 Internally there is a baffle plate which increases heat output and efficiency by increasing the distance that hot flue gases have to travel before going up chimney. We just held next stove show you whereabouts it inside stove. Obviously bit difficult taking picture itself!

So this is the way I like to open the door on an Oakfire stove. You just use the operating tool and then pivot the door backwards, but your fuel in, and then close the door again. This does not work with fuel like sawdust unless you use the cunning trick of filling paper bags with the sawdust.

Here is the other way to open the door of your Oakfire stove. This is handy is you need both hands free to load in your fuel because you can completely remove the lid. Remember that the lid will be very hot if you plan to put down somewhere!

Made in the UK

Oakfire stoves are laser cut, welded and assembled in the UK. After destructive testing we opted for 3mm steel for the two smaller models and upped this to 5mm for the two larger models.