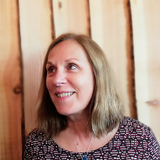 I was invited to an Esse Events Day held at Bates Green Farm at Arlington.

This was a really positive experience and have come back feeling very encouraged that Esse are a good British company who really care about their products - how they are manufactured, marketed and looking to the future.

We were shown their most recent innovations which include two small woodburning cookers, the Warmheart and Bakeheart, ideal for a small space, cottage, bothy, garden shed or beachhouse.

Esse have also brought out a balanced flue gas stove and a contemporary looking electric stove, the Vector.

We were then invited into The Bluebell Kitchen which is a part of a cookery school run by Philippa Vine and her husband, Michael.

Philippa gave us a great demonstation of the versatility of the Ironheart wood cooker. She cooked a fried egg on the hotplate, as well as toast. She made savoury profiteroles stuffed with sussex cheese flavoured with Harveys beer, stuffed butternut squash, a pearl barley and mixed veg casserole, bread flavoured with roasted tomatoes, fish parcels and finally cooked lamb fillet directly on the hotplate, not forgetting the roasted red peppers with spinach.

The family run a small grassland farm producing their own poultry and lamb. With the woodland they open it up in the spring for Bluebell Walks and host several thousand people in aid of various charities.

We were guided through the ancient woodland by Philippa's father and then it was time for lunch in the large farm shed.

After lunch we were invited back into the Bluebell Kitchen where we met the chef Ian Dowding, one of the inventors of the banoffee pie. We were each given a slice to try.

Philippa then gave us another cookery demonstration, but this time she was cooking on the new Esse electric cooker with induction hob. She cooked florentines, blackberry frangipane tarts, caramelised apples and drop scones.

A great day, thank you to Esse and The Bluebell Kitchen.