The building regulations say that the flue diameter (or cross sectional area) must not be smaller than the size of the stove outlet, which generally makes great sense.

The recommended minimum diameters for stoves is as follows:

If the stove is Defra Exempt and has a 125mm outlet then a 125mm diameter flue may be used.

So the regs recommend a minimum flue size of 150mm for any stove (on which wood could be burnt) unless it is Defra Exempt.

That's worth remembering because many non-Defra Exempt stoves come with a 125mm flue outlet, which then requires upsizing to 150mm.

A 150mm liner on a stove with a 125mm flue outlet can accumulate a lot of deposits, soot and tar before the performance of the stove is affected and the user alerted to the build up, if the chimney is not properly swept (as is sometimes the case). So its especially important that the chimney is properly and regularly swept if the stove has a 125mm flue outlet but is attached to a 150mm liner.

Deposits, soot and tar can be dangerous in a number of ways

Tar cannot be removed by the sweeps brush so it can be best to line and insulate your chimney to stop it forming in the first place.

What is a soot fall?

Soot fall
The build up of deposits in the chimney can lead to them falling down which is called a soot fall. That can of course block the chimney. If the chimney is blocked smoke will very likely leak into the house and that is potentially dangerous especially, if this happens when you are asleep (and especially so with a coal fire).

Soot builds up in a chimney over time, especially when burning wood or bituminous coal, and especially when slow burning overnight (do try to avoid overnight burning or 'turning your stove down for the night' - it also results in higher emissions).

From time to time the soot becomes dislodged or grows to such a size that it falls down. A soot fall is accumulative meaning that it can 'snowball': if the soot fall starts at the top of the chimney then it can bring down much of the soot below it as well. This can block the chimney or the connection to the stove.

The Solid Fuel Association rightly points out that smokeless fuel gives far less chimney deposits than bituminous coal. Thus it is far safer (and you'll get more heat too) to burn smokeless fuel, such as anthracite (e.g. Taybrite) than less pure alternatives.

You may like to read more about how coal formed and types of coal.

Some stove manufacturers produce stoves with a 125mm flue outlet but stipulate that it should be connected to a 150mm flue/chimney system. In cases such as these you must follow the manufacturers stipulation.

Wood pellet stoves and boilers are a prime example of where these regs can be onerous. Many pellet boilers have an 80mm outlet and a 150mm chimney can create too much draw or suck for them. One may then end up installing draught stabilisers to cope.

When we design flue systems for our customers and, if when the pellet boiler would be better off attached to a chimney with a smaller diameter than recommended by building regs we take this into account and run the system through software to verify it to a relevant British Standard. So not only will the pellet stove work better, but the chimney system is compliant. 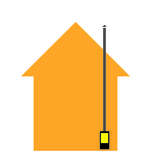