What is a Load Unit

A load unit or load valve (sometimes called a heat charger or laddomat) does much the same job: they get the water in the boiler of your stove up to temperature fast and then maintain a high return temperature to the boiler. This makes the stove work more efficiently, reduces tarring (increasing the lifespan of the boiler, stove, and chimney system), and improves heat accumulator charging.

As the stove heats up the water is pumped through the very small boiler circuit shown in red in the picture above. When the water comes up to temperature the load valve or load unit allows increasing amounts of hot water to flow through to the heating system - shown as the orange circuit in the picture.

With a traditional system it takes a long time for the stove to heat all the water in the system up, and all the time that the water is still cool the stove is running inefficiently, tarring inside the stove and flue is increased, and the boiler life reduced. Boilers in stoves can rot out where they are coolest because this is where the most tar deposits occur. A classic sign of this is damage at the bottom of the boiler in the firebox as well as opposite the return flow inlet on the boiler. Both these places are where the boiler is coldest.

Without the load unit or load valve the water in the system takes a long time to reach running temperature. Until that time the stove is not working efficiently and, because of all the relatively cool water in the boiler the stoves gives out little heat to the room. Usually the room with the stove in is your living room and you want it to get warm fast as it is quite likely that you are sitting in front of the stove wanting to warm up. Using the load valve or load unit means that you do not have to wait until the whole central heating system comes up to temperature; the stove quickly starts putting out a decent amount of heat to the room.

The other problem with a traditional setup is you would commonly have a pump controlled by a thermostat on the hot water flow from the stove. This starts the pump when the water reaches, say, 60C. Up until then the water was flowing through the system through thermosyphoning, which is relatively slow when compared to pumped water. What happens then is that the boiler is quickly flushed with colder water which rapidly cools it. That isn't very good for the boiler and again this can reduce the boiler lifespan.
Using a load unit or load valve eliminates this problem because the water in the boiler is always kept up to temperature by the thermostatic valve.

Additionally when a stove is linked to an accumulator without the load unit or load valve all the water from the stove is pumped into the tank which greatly increases the flow rate through the tank, which reduces stratification. The Load Unit only allows water that is above 60C to flow to the accumulator tank, and only when the water has reached 70C does the unit fully open, letting all the water from the stove into the tank. 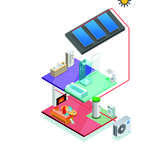 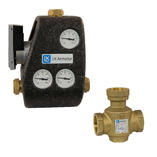