Spreading heat from a stove around the house 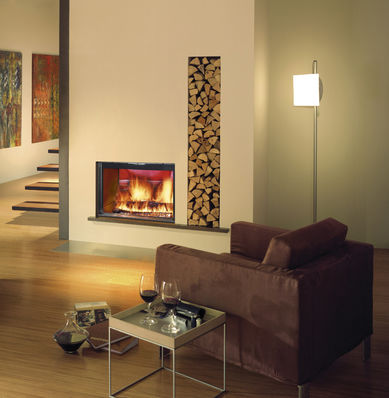 First we had open fires which we huddled by

In the old days British houses were traditionally heated by an open fire. You would sit facing the fireplace, getting warm on the front of your body and feeling a cold draft on the back of your neck. The open fire would put some heat into the room, but the majority of its heat went straight up the chimney. However its greatest inefficiency was that, because it used so much air for its combustion, it would draw in large amounts of cold air from outside, creating drafts and cooling the rest of the house. At the end of the day people would run through cold corridors into cold bedrooms clutching hot water bottles.

With the advent of stoves homes grew warmer and more efficient

The introduction of wood burning stoves improved the situation hugely. The stove would radiate much more heat into the room and send much less heat up the chimney. With so little air being used for combustion, it didn't create drafts or suck much outside air into the building. Stove technology has carried on improving and we now have stoves with efficiency ratings of over 70%, and in many cases 80% and over.

A stove will heat the room more quickly, more efficiently and it will also spread that heat further around the house than an open fire ever could. However there are a number of ways to spread that heat even further to produce anything from a background heat in some other rooms to whole house heating.

Boiler stoves and pellet boilers can heat your whole house

The most common way to spread heat to the whole house is using a stove with an internal boiler that passes a proportion of its heat directly into hot water which is then pumped around radiators or an underfloor system. This will enable you to regulate how much heat you want in each area of the home wherever the stove is situated. Some people have range cookers that are also able to do the cooking as well as heating hot water and rooms. An alternative to a log or multi fuel boiler stove can be a wood pellet boiler stove. Pellet stoves have certain advantages in that the fuel is clean and easy to store, they light themselves and will turn themselves off when the heat demand has been met. Also the government will pay you a grant (the Renewable Heat Incentive) for seven years as a way to encourage people to change over to renewable heating. It should be enough to pay for your pellet stove, its installation and a certain amount of your fuel.

A boiler stove heats up water which can then easily be pumped to your radiators or to a thermal store. You can run the system in tandem with a standard gas or oil boiler or other renewable heating like heat pumps.

Typically around 80% of the heat goes to water so this is a way in which you can choose a stove that can power your whole house, but the room with the stove doesn't end up getting too hot.

You can read more about using a stove to run central heating and see the many Stoves with backboilers that we have to offer. If you choose to work with us then we offer full integrated heating system design as a standard part of our service, including full heat load calculations for your home so we can size the boiler correctly.

Allowing the hot from the stove air to spread

Central heating systems can be costly to install and require pipework throughout the house and radiators in every room so here we will look at other ways to let a stove keep some or your entire house warm. The simplest method to move that heat even further around the house is to simply to let the warmth spread via the air.

There are several ways of doing this but first you should think about how hot and cold air flow in your house.

Airflow and convection currents around a stove 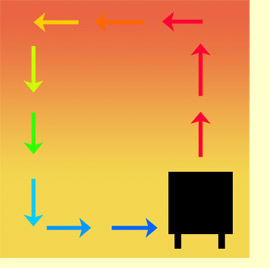 It is useful to think about airflow within your house. When moving the hot air from your stove around the house it is very important to install a return circuit so that air can flow back to the room which the stove is in. In this way you form an air circuit. If you do not then your will de-pressurise the room that the stove is in. This can result in poor performance and smoking of the stove (and can be dangerous) and at the very least will result in excess cold air being pulled in from outside through your ventilation as well as meaning that the movement of air around the house that you are trying to achieve will not work very well.
The air 'wants' to follow the way in which it normally flows. Hot air rises from the stove, meets the ceiling, moves away from the stove and cools. When it cools it starts to fall again until it meets the floor and it then moves towards the stove again. In this way the airflow forms a circle. Hot air distributed to other parts of the house move in a similar way and so you should place your vents, grilles, fans to work best with the way in which the air moves in the first place.

Keeping it simple: Open the door

Perhaps the simplest way to allow heat to spread into your home is to open the doors. This works better the larger your door is the opening will allow more air to flow through it.

Forced air flow through air ducts with in-line fans on an inset stove Inset stoves often have 2 - 4 hot air duct outlets on top of the stove. You attach class II liner as an air duct to these outlets and run the liner to other rooms. Often you run these air ducts up the chimney breast to the room above. Hot air from the duct is delivered to the room through an air vent in the wall. As with all these ways of moving hot air around your house be aware that you will need to provide some way for air to return to the room that the stove is in.

Using floor vents / grilles
Because the hot air made by the stove rises you will find that the hottest part of the room is near the ceiling. It is possible to install air vents to the room above in the ceiling with a floor grille above. The air vent transfers the hot air in the room that the stove is in to the room above. This is a very simple and cheap way of moving heat around but make sure that the vents and grilles are large - small vents / grilles will make little difference. As always you need to ensure that air can return to the room with the stove in.

Obviously the ducts / grilles will also transmit noise and smoke so you need to bear this in mind: if the room above is a bedroom then do not do it. If the room below fills with smoke you definitely do not want the bedroom to also fill with smoke. An advantage of running ducts from an inset stove is that the air supply is usually taken from low down in the room which is one of the places that smoke gets to last if you had a fire in your home. 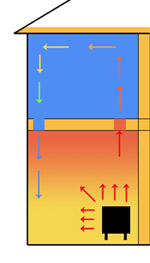 If vents are put into the ceiling into rooms or a hallway upstairs then the warmth will naturally spread there. The same amount of warm air that goes upstairs will then be sent down the stairs as cool air. Hey presto you've now created a convection current and your stove will spread a background heat around the house. What you should bear in mind is that if your house were on fire you should be cautious about spreading smoke from one room to another.

Convection stoves give a more even heat

Radiant heat (the heat that you feel on your face that is coming straight out from the stove) will warm the room where the stove is but it is convection (warming air) that will carry that warmth further around the house. To increase the amount of heat going to convection rather than radiant heat, a number of stoves now have convection panels built in. These panels have a gap between them and the body of the stove. As the stove gives out radiant heat it warms the air between the panels, sending the hot air upwards and drawing cold air off the floor up between the panels. The net effect is that it is not as hot immediately around the stove but warmer across the whole room and the warmth will tend to spread much further.

The fastest growing sector in the stove industry is insert or inset stoves. These stoves are built into a chamber in the wall and take in cool air from floor level and warm it around the stove body. Once warmed they either vent warmth out from just above the door or from vents up near the ceiling. Insert stoves are usually designed to give some radiant heat from the front, but the majority of their heat as convected warmth. Again this means that it won't overheat around where the stove is installed, particularly with models that release the heat up towards the ceiling. Instead it builds up a comfortable heat right across the room which then easily spreads into other parts of the house. This type can also vent warmth directly into the room behind. Some of these stoves, like the Fondis and Woodfire models, can also duct heat upstairs or to more distant rooms. While the warmth will travel horizontally it will need a certain amount of rise to get it to do that and there are fan systems available that can duct heat throughout a house if needed.

Wood-burning stoves are a cosy and economic way of adding heat to your home and the further you can spread that heat, the more money it saves you and the drier and warmer your house becomes.