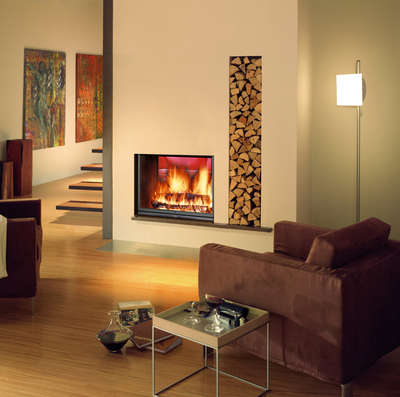 Inset stoves are sometimes called insert stoves which are both the same thing. A cassette stove on the other hand is an inset stove with a second layer of metal around the firebox which forms an air gap around the stove. That allows air in near the bottom and the heated air then flows back into the room. Cassette stoves may sometimes be a little simpler to install.

The largest of the Ulys range, this stove has a larger door than the Ulys 1100, with a large output of up to 17kW this would be suitable for the larger room.

The smallest model in the Stella 3 range, offering an output of 7.5kW, the V350 has all of the qualities of the larger models but designed for the smaller fireplace.

The smallest of the Ulys range with a maximum heat output of 10.6kW This stove has all of the qualities of the larger models, designed for the smaller fireplace.

The corner version of the Ulys 900, this stove offer a unique lifting door mechanism enabling this stove to also be used as an open fire. The picturesque flames can be viewed from two sides giving a wider view of the flames.

The Mendip Christon inset stoves come in several different sizes. This is the smallest output model.

The Mendip Christon 550 inset stove will give you 4.7kw output to the room.

The Fondis V80 L is a beautifully sleek modern woodburning stove that can heat a whole room or be turned right down just to keep things cosy with its flickering flames.

The Fondis V60L is a medium output woodburning inset stove. Giving out up to 7.9kW of the heat the V60L is suited to the medium sized room.

This large wide-screen stove with a maximum heat output of 14kW this stove has all the quality and ease of use so characteristic of Fondis stoves.

The Westfire 32 Inset stove has a stunningly wide glass window in the door, giving a great view of the dancing flames when the stove is hot.

The Westfire 35 Insert stove is a 4.3kw multifuel stove giving you the option to burn wood or smokeless coal.

The single sided Fondis Stella 3 H700, has all the quality and ease of use so characteristic of Fondis stoves.